Not long ago, I purchased a new Gibson '59 Les Paul reissue. I'd been looking at R9's for years but there was always something I thought the Custom Shop missed or the guitar gods couldn't agree on.

Be it a cardboard colored fret board, too heavy or light in weight, a mismatched top, uneven colored binding or it was tonally unbalanced.

The one I finally purchased has a gorgeous washed cherry top, a perfect feeling chunky neck and a vintage looking dark colored fret board, nice!

I try all electric guitars acoustically before plugging in. This one rings out evenly, just beautiful.

This reissue is a VOS model. This is defined by Gibson as, "vintage original spec." 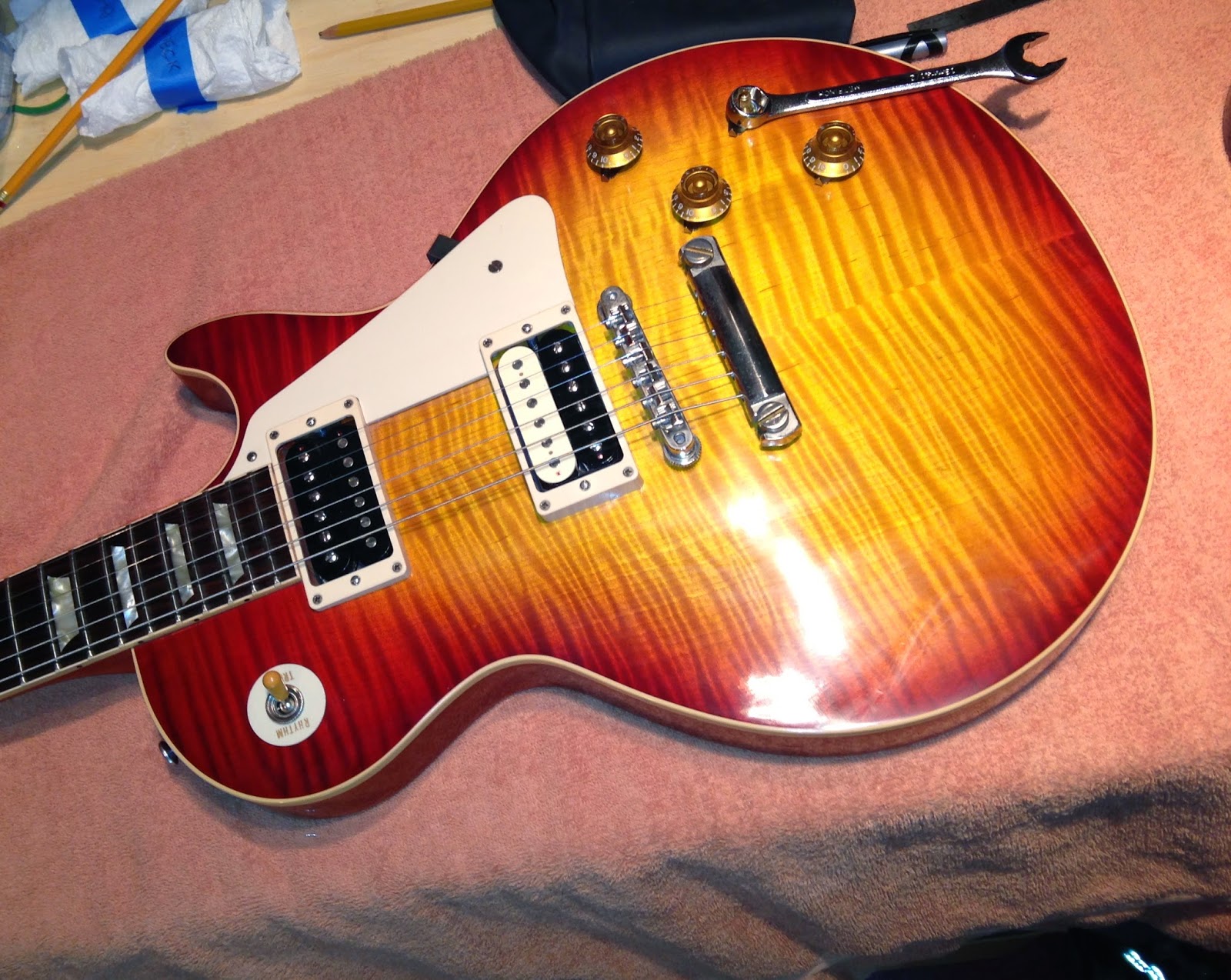 I took the new acquisition to a recording session and noticed the factory intonation was pretty good right out of the box.

After playing for a few months, I discovered the volume and tone potentiometers were not "vintage original spec." Here's how I found out:

Working along side other guitarists, I played and compared their Gibsons to my R9. I had my own '66 ES-335 as well.

It became obvious the Burstbucker pickups on mine lacked the character and tone of the other pickups... Nowhere near the sound of a real PAF or other modern replacement. My pickups were thin with none of the "slap" and toughness of a classic PAF.

Before the hate mail rolls in, let's be clear: This is only one man's subjective opinion.

Needless to say, I replaced the pickups.

While changing pickups, I had to replace the bridge volume pot because it developed a dead spot a few months earlier. No output right around number 9 on the knob.

However, I ended up replacing the entire wiring harness with an RS Guitarworks harness because I discovered the Custom Shop installed 300k pots... An original '59 is supposed to have 500k volume and tone pots!

After replacing the wiring harness. It became obvious how poorly the stock Gibson pots had functioned all along. When turning down the volume, I used to lose a lot of treble. Also, the volume levels were "all or none" with very little room for finer adjustments.

In conclusion... When someone pays top dollar for an instrument advertised as "vintage original fuc*^#* spec," shouldn't something like the electronics be of good quality and as close to the original blueprint as possible?

Since the upgrades, I've talked with other guitarists about their experiences with the electronics on Gibson reissues and we're all in agreement:

Paying a small fortune for a Gibson reissue is merely a good starting point. You'll have to pay even more to replace most of the electronics to have the guitar you always wanted.